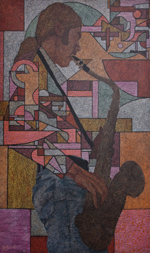 The Sax Player, painting by Will Richwood

Over the years I’ve worked on a few thousand woodwinds. From time to time something interesting would pass across my workbench, so I though I’d share a few random observations.

SELMER SAXES The oldest Selmer I’ve worked on was a Model 22 (the serial number was around 2050). The thing I remember most is that the side Bb did not have a separate pad, but instead closed the Bb pad in the upper stack. The key mechanism was rather primitive compared to modern horns, but at the time Selmer was pretty much the cutting edge of design.

I’ve worked on a Model 26 (Cigar Cutter), Radio Improved, one of the first Balanced Actions made (it had a note in the case from George Bundy describing the advantages of the new offset keys and improved scale), and of course dozens of Mark VI and newer.

You may not be aware that there are at least four versions of the Mark VI. The very earliest (around serial 60,000) can be recognized by the low C guard, which has the same design as the Super Balanced Action (only two braces compared to three braces on the later Mark VI). The next series (60,000 to 120,000) are easily recognized by the distinctive deep orange tone lacquer. The mechanism for the side C and Bb are a closed loop, rather than the later “ball and socket” design. The third series (120,000 to 130,000) has the newer design on the side keys, but still retains the deep lacquer. The last series, from 130,000 until they VI was replaced with the VII, has the lighter “yellow” color lacquer. Of the four I think the 120,000 to 130,000 series has the best balance of tone (the older horns are darker, and the newer brighter).

It’s interesting to note that when Selmer changed over from one model to the next, it was not unusual for the first horns off the line to have some of the key mechanisms carry forward from the earlier model. That very early Balanced Action had keys I’ve not seen on Balanced horns made in later years.